Early December 1941, Manila was preparing to celebrate Christmas. Rumors of war were in the wind but largely dismissed. American military brass had given assurances they could handle the Japanese. Moreover, General Douglas MacArthur made it known that if an attack were to come it would be April 1942 at the earliest. Escolta shops brimmed with yule time merchandise. And then a dramatic turn of events that would turn life in Manila on its head. The Japanese made a sneak attack on Pearl Harbor in the Hawaiian Islands. December .7th 1941. 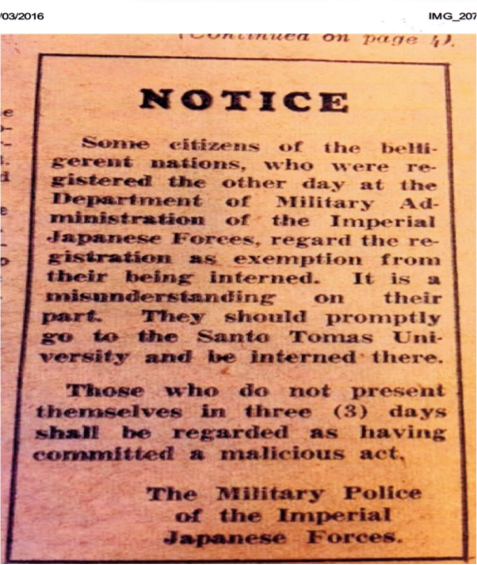 News Clips from the Manila Tribune tell the Story Below:

December 8th (Monday) Headline “War comes to the Philippines”. Small units of the Japanese Imperial Army landed in Northern Luzon and Mindanao. Clark Airbase and Cavite Naval Base were hit hard from the air.

Mid December- Main Body of the Japanese Army landed at Lingayan in the north and Mauban south of Manila. The target –Manila. American and Philippine Forces fell back. MacArthur ordered long established “War Plan Orange” into effect. Forces would concentrate in the Bataan Peninsula, fight, and hold on until reinforcements arrived from the U.S.

December 24 – On Christmas Eve General MacArthur, President Quezon and High Commissioner Sayre moved to the safety of the Island Fortress of Corregidor. “Manila Declared Open City” read the Tribune. U.S./Philippine Forces continued streaming thru the City from the south on their way to Bataan. Abandoned Army warehouses were looted. Stocks of oil and gasoline in Pandacan storage tanks were set ablaze by Army demolition crews.

January 3 (Saturday)- “Japanese Troops Enter City- Japanese Troops Welcomed”. On the front page was a “Message from the Commander in Chief of the Japanese Armed Force”. The “Message” requested “Cooperation” from Citizens and warned “those not cooperating will be subject to the Death Penalty”. A Curfew was set from 8 pm- 6 am. “By order of The Japanese Commanding General”.

—“The Sovereignty of the U.S.A. over the Philippines has completely disappeared. The True Aim of Japanese Imperial Forces is to drive out the evil influences and power of the U.S. which have obstructed the natural development and healthy growth of nations in East Asia”.

—“Those not accepting Japanese War Notes will be punished severely”— The front page ordered “All Fire Arms and Ammunition must be surrendered to the Japanese Military Police”.

January 6 (Tuesday) “All Third Party Citizens must register at the Bayview Hotel. Americans and British must report to Santo Tomas University for Internment”—The Manila Hotel was taken over by the Japanese Army and guests told to move out.—The Tribune carried a warning.

“Announcement- Anyone who inflicts or attempts to inflict injury upon Japanese soldiers or individuals shall be shot to death”…and…”If the assailant cannot be found we will hold ten influential persons as hostages who live in or about the Street where the event happened”. —

January 15 (Thursday) “Use of Autos Restricted”-the paper noted shortages of gas and oil that required “Immediate Restrictions- Effective January 17th all vehicles must be registered and permitted by the Japanese Army Department of Administration”–“Vehicles without a permit after January 17 will be seized”.

January 23 (Friday) “Vargas, Aquino Urge Full Collaboration”. The daily reported on the “Establishment of a Civil Administration led by Vargas.

January 25 (Sunday) “The Bicycle undergoes a Revolution”. The paper reported the emergence of the bike as a popular form of transportation replacing motor vehicles

February 1 “People in Occupied Areas told to go Home”— and carried on Announcement “All Radio Transmission Devices must be turned over to the Japanese Army, unless specifically permitted”. Meanwhile war raged on in Bataan. It would continue until early April and in Corregidor until early May. –BB