Two leading entertainment venues in the 1920’s/1930’s were The Santa Ana Cabaret and The Jai Alai Palace. Both legendary establishments are no longer in existence.

American John Canson arrival in Manila as a regular Army soldier. Like many Spanish-American war Vets he decided to “muster out” in the Philippines. Reportedly, he married a Filipina in 1904 and made a living by operating several small night spots. He managed to put together a group of backers, just before WWI, to open a large dance and dinner Club. That was the beginning of the Santa Ana Cabaret. The building was a vast barn like structure almost the length of a football field and thirty yards wide. Located on the outskirts of Manila, a street car line ran conveniently nearby.

Santa Ana Cabaret was touted by Canson, who had a flair for promotion, as the “Largest Cabaret in the World and the Best Dance Music in the Orient”. The Sta. Ana’s reputation grew in the 1920’s/1930’s. It became popular with all strata’s of Manila. High Society down to ordinary enlisted soldiers and those in between. The Sta.Ana was actually two clubs in one. On one side was an area for the Dinner/Dance Crowd. Tables set with white linen table clothes. Upper echelon military officers and ranking government officials frequented this area. On the other side was an area enjoyed by bachelors and military men seeking a night out. A fleet of Filipina “Taxi Dancers” provided companionship at one peso a dance. The two areas were separated by a white picket fence. Romances struck-up on the dance floor frequently continued on after the Cabaret closed for the night. 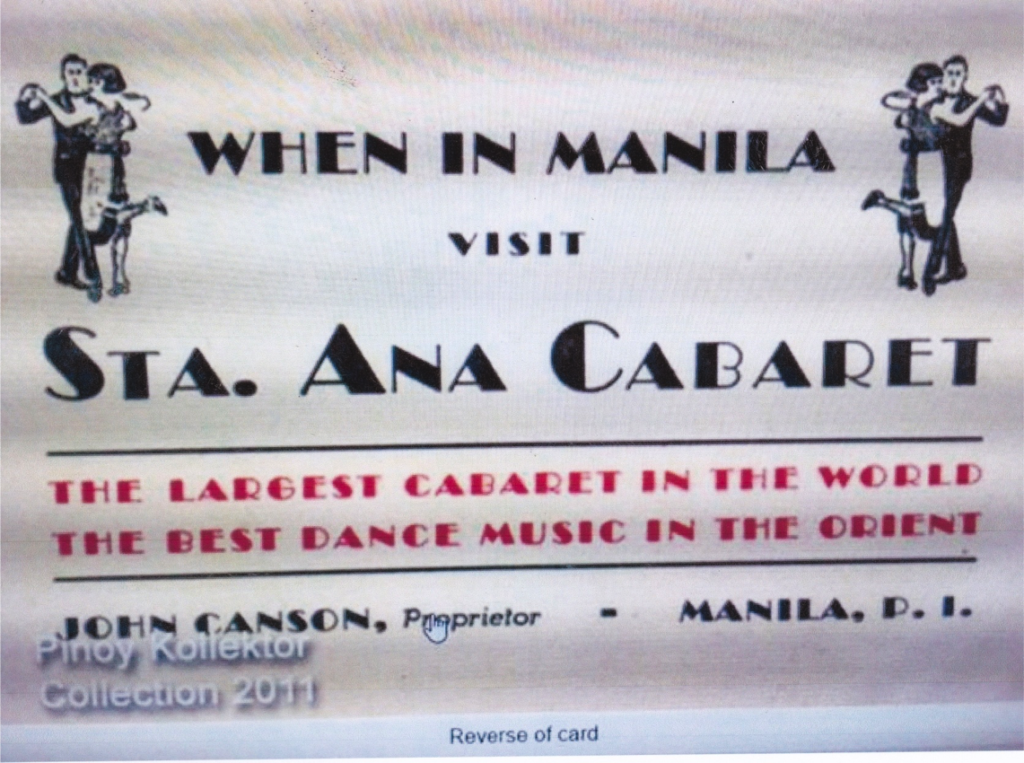 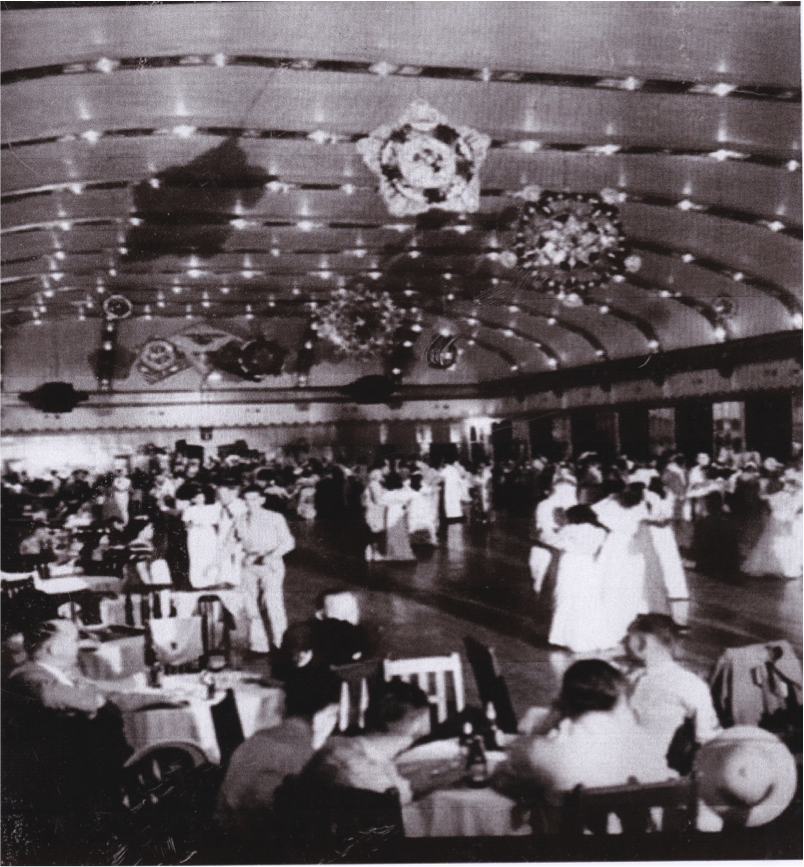 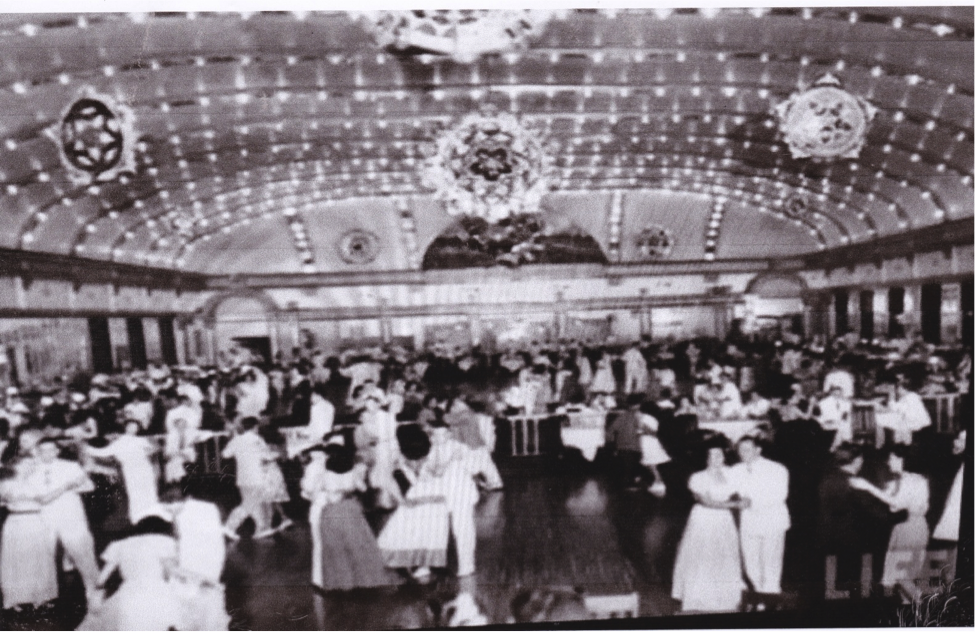 The sport of Jai Alai originated in Spain’s Basque area in the late 1800’s. Described as “the fastest game in the world” due to the 150+mph speed of the goat skin covered hard ball.

In the mid 1930’s a group of businessmen decided to bring Jai Alai to Manila, in an entertainment complex with Jai Alai as its center point.

Prominent Los Angeles architect, Welton Becket (age 36) was engaged for design work. Becket did not disappoint. He designed a four story building featuring a streamline Art Deco Cylindrical Glass facade. Inside was a three walled Jai Alai Court and viewing area, a ball room, keg room, 4 bars, and a gym. Top attraction was the luxury “Sky Room” where customers could dine and drink while watching the action below from the balcony. The entire complex was air-conditioned. Very quickly the Manila Jai Alai Palace was acclaimed as one of the finest examples of Art Deco Design in Asia. Construction started in 1939 and was completed in 1940, two years before the outbreak WW2.

The Jai Alai Palace, damaged in the 1945 Battle of Manila, was repaired and reopened. Business fell off during the years of martial law and led to closure. Despite protests the derelict building was torn down as part of an urban redevelopment effort in 2000. BB 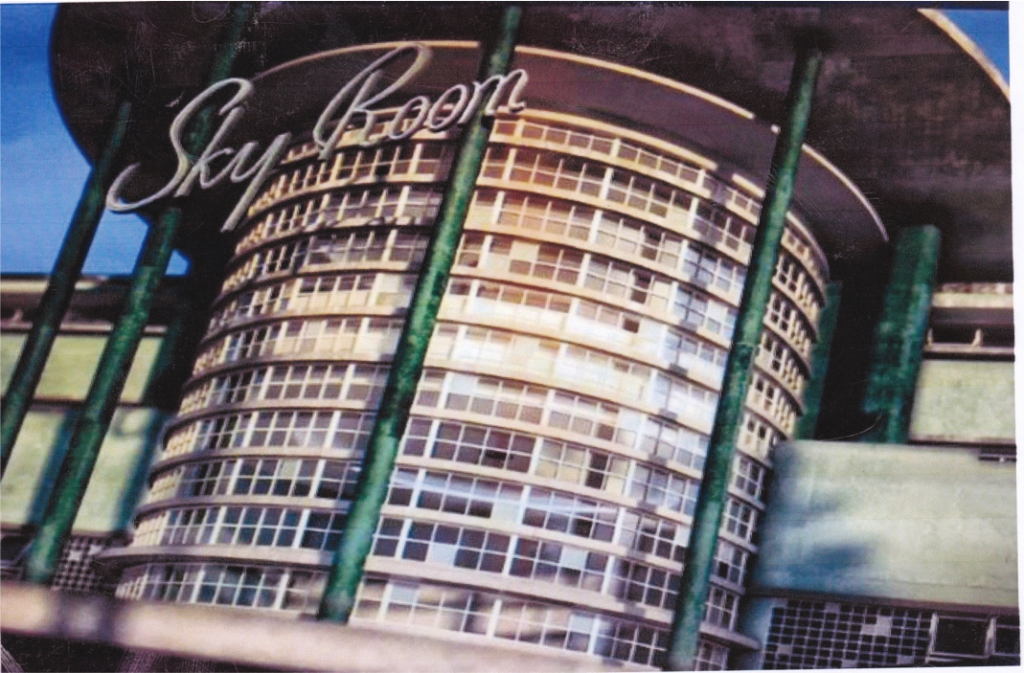 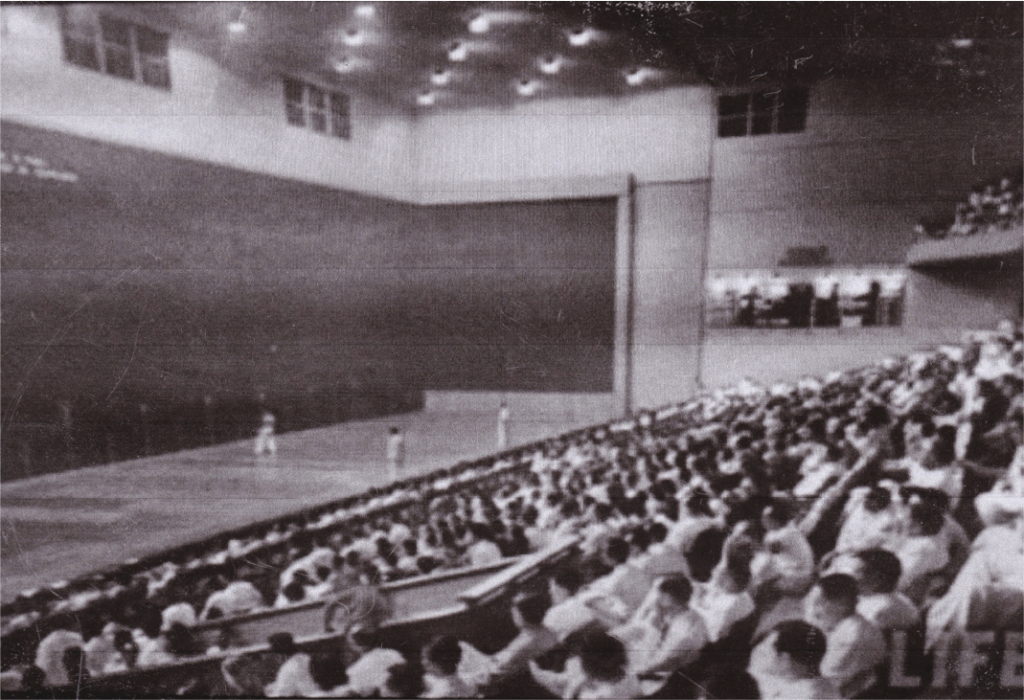 “Action on the Court by “Pelotarians”” 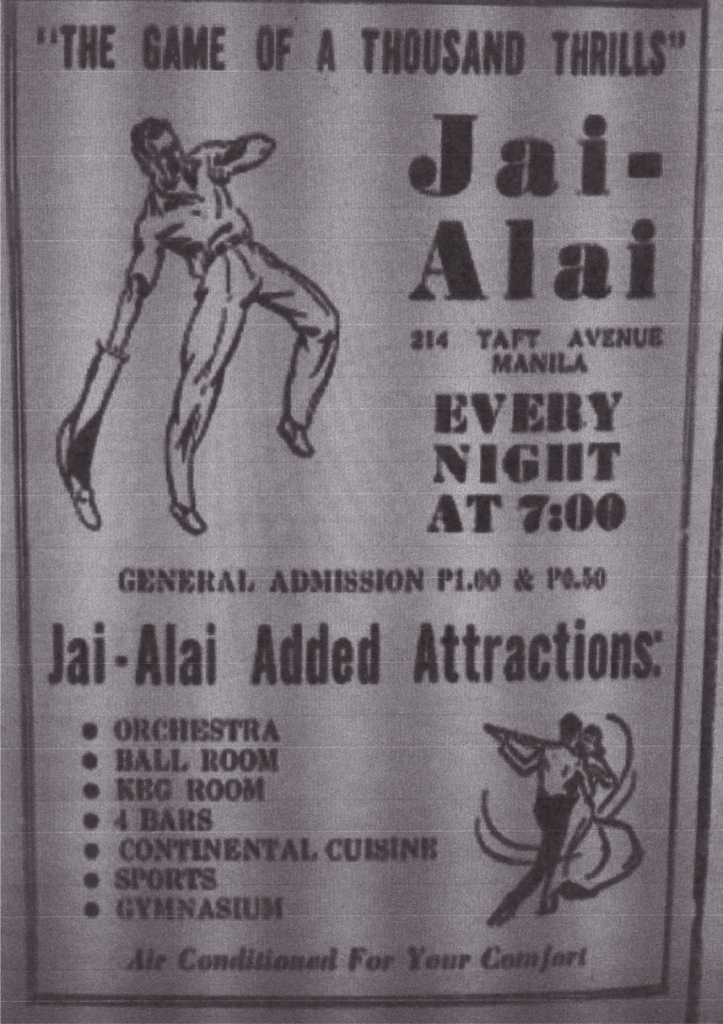 “Ad: The Game of a Thousand Thrills” 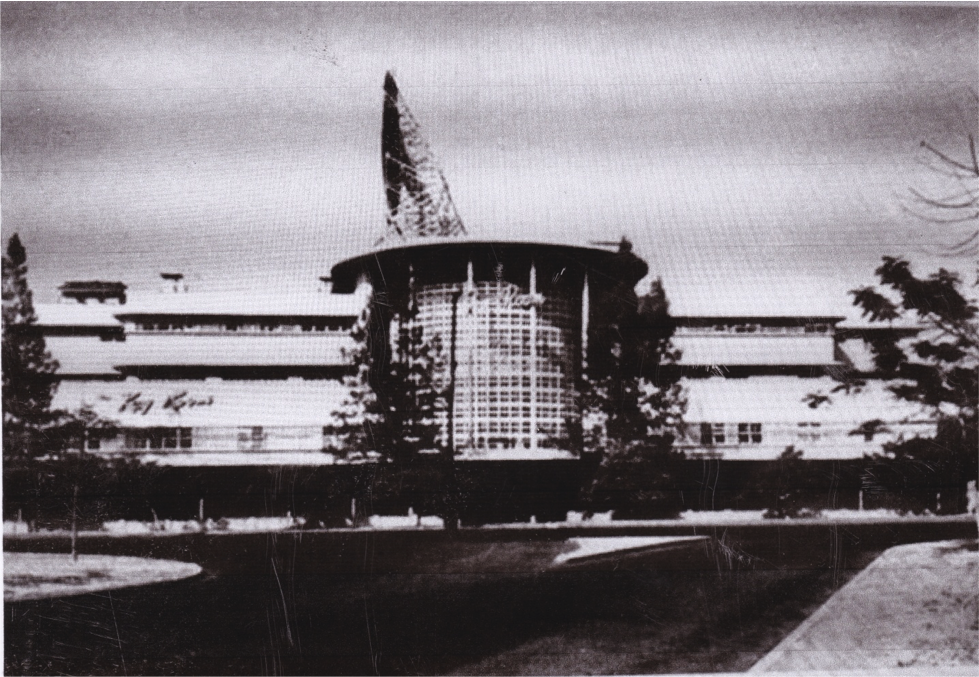 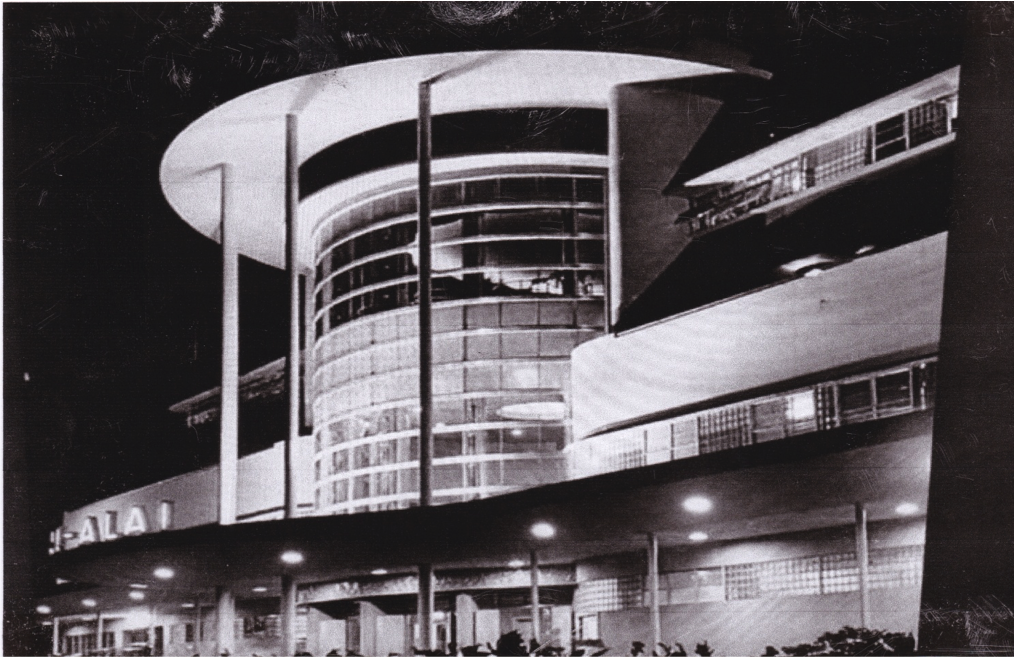