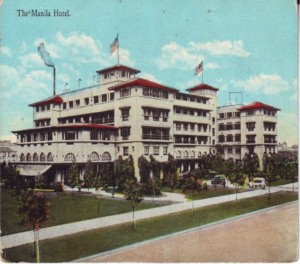 The Manila Hotel before 1920

The center piece venue for society and official entertainment in the American Era was the Manila Hotel. It all started with President McKinley’s second Philippine Commission led by Bill Taft in 1900. Taft envisioned an American style, first class city in Asia. Toward his vision he engaged acclaimed city planner Daniel Burnham. Burnham and associates arrived in 1904. He crafted a Manila Master Plan themed on work he had done in Washington D.C. The plan included space for a luxury hotel. New York architect William Parsons was engaged for design work. He came up with an “H” shaped hotel. Governor General Cameron Forbes (1909-1913), a wealthy investment banker, played a crucial role in putting together financing.

The Manila Hotel opened July 4, 1912. It quickly gained a reputation as a first class venue for entertainment, government and business events. Visitors arriving on steamships made Manila Hotel their base. In the late 1930’s the hotel was one of the first public buildings to feature air conditioning. Its most famous long term resident was General Douglas MacArthur, military advisor to President Quezon 1935-1941. MacArthur and his wife Jean occupied the Pent House Suite. They departed Christmas Eve 1941 for the Corregidor Island Fortress shortly before the Imperial Japanese Army entered Manila. The hotel, including the MacArthur Pent House, was severely damaged in the battle of Manila in early 1945. BB