The 1898 War with Spain was America’s first foreign conflict. Main theater was Cuba. But there was an Asia sidelight. Commodore George Dewey, Commander of the U.S Navy’s .Asian Squadron, was ordered to neutralize Spain’s navy based in Manila. America had little knowledge of the Philippines. President McKinley reportedly was uncertain as to its location. Few knew that, like Cuba, locals were in an uprising against Spain.

Dewey’s ships steamed over from Hong Kong. They quickly dispatched the Spanish squadron. Then Dewey, an instant American Hero promoted to Admiral, waited in Manila Bay for US Army troops to arrive.

The war ended after only six months with the defeat of Spanish forces in Cuba. Washington was faced with the decision of what to do with acquired Spanish possessions. Cuba was set free. Puerto Rico, the Virgin Islands and Guam taken by the Americans; Marianas, Caroline and Marshall Islands sold to Germany.

What to do with the Philippines? A strong “Westward Ho” movement and “Manifest Destiny” attitude prevailed in the United States. Many in Washington witnessed China’s dismemberment by European powers and Japan with alarm. They craved an American outpost in Asia. In a fierce debate the McKinley Administration decided the United States would temporarily govern the Philippines to preclude a grab by Japan or Germany. America would prepare the islands for eventual independence. Two key American goals were 1) to set up a national school system with English as a unifying language and 2) to build a credible military force as a deterrent to outside aggression.

The war with Spain and the ensuing “Insurrection” brought in several thousand regular US Army and US State Militia Volunteers from across America. Further a new batch of Americans arrived to officiate in government and teach. Missionaries added to the mix. The first twenty years of American rule were led by a series of Republican Party Governor Generals. Their thinking was decidedly colonialist. Then came Democrat Governor General Harrison. He heavily favored placing Filipinos in Government, replacing Americans. This displeased many Americans who, nevertheless, took it in stride and set off to make their marks in business, agriculture, transportation and mining.

In the 1920’s the population of Americans in the islands was about 8,000. Added to that were rotating Army men of around 2,000. However, American power was disproportionate with control of government and large swaths of commerce, utilities, transportation and banking. Principal voice of the American community came in the form of the Chamber of Commerce. Its board of directors consisted of well connected, powerful men. Most had served in war or had filled key government positions. The Chamber worked consistently and spoke loudly advocating the Philippines be a “Permanent Organized Territory of the United States.. At the same time Filipino politicians, led by Manuel Quezon, Sergio Osmeña and Manuel Roxas, fought for independence.

Disaster struck the Chamber lobby in the form of the October 1929 New York Stock Market Crash and ensuing global depression. In 1933 the Republican Party was voted out of office with Democrat Franklin D. Roosevelt elected President. FDR focused immediately on US domestic issues. The Philippines was increasingly seen as a liability, using up resources better spent at home and benefiting from unfair agricultural trade advantages jeopardizing America farm jobs.

Congress had already passed the Hare-Hawes-Cutting Bill in 1933. It laid out a procedure for Philippine independence. The law had been rejected by the Philippine Congress. In 1934 a very similar act, the Tydings-McDuffe law was passed by both American and Philippine legislatures and signed into law by FDR. The Philippines would be a US Commonwealth for ten years and gain full independence July 1946.

The American Chamber fought a vigorous rear guard action, forecasting Philippine economic disaster. But Washington was in no mood to listen dealing with the Depression. The American community settled down to business. The long simmering Philippine independence issue was settled. A mid 1930’s gold mining boom soothed wounds and distracted attention. BB 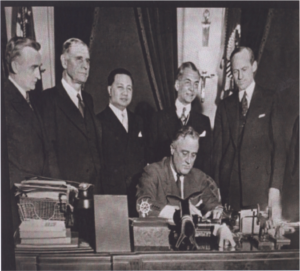