March 1933; Franklin D. Roosevelt, (FDR) a Democrat, is inaugurated U.S. President. America is in the depths of “The Depression,” triggered by the November 1929 New York Stock Market Crash. Many factories are closed, massive number of workers jobless coast to coast. Immediately FDR declare a National Emergency starting with a Bank Holiday.(Closure of Banks).

January 1934; Congress passes the “Gold Reserve Act”. Under the Act it becomes unlawful for most Americans to possess or own gold. All gold must be turned over to the Treasury. The Gold Reserve Act also devalues the US Dollar in terms of gold. The Treasury will buy all gold at $35/ounce, an increase of $15 above the existing price of $20/ounce. 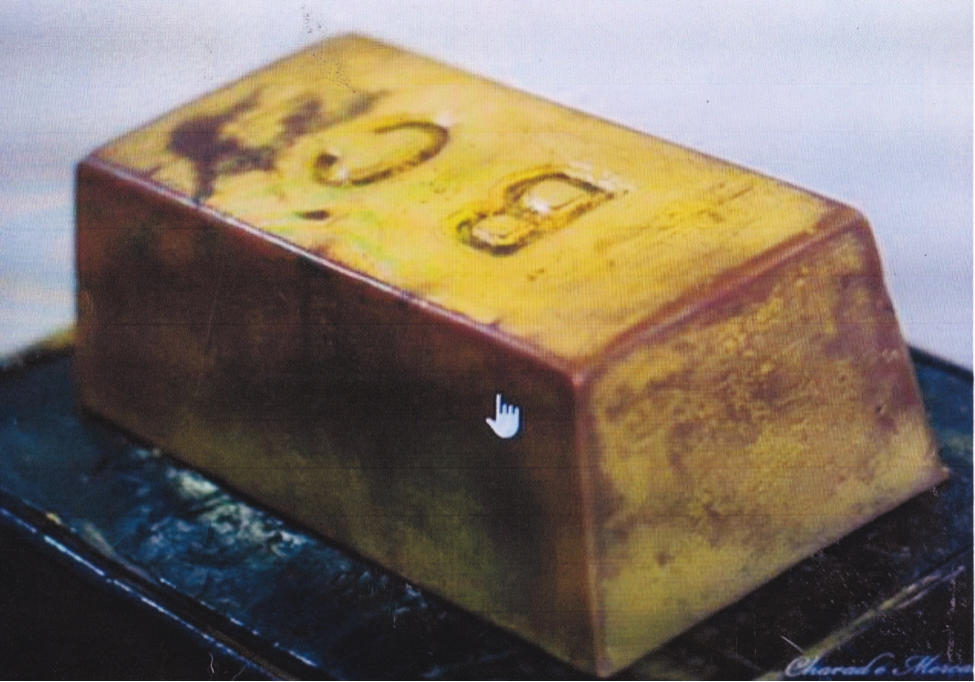 Gold Bar from the Benguet Mine “BC”

The Act is meant to spur consumer spending. It does. Gold starts to flood into treasury vaults both from Americans and foreign countries. It is brilliant economic stroke by FDR.

Roosevelt’s bold more to devalue the US Dollar by 75% touches off a worldwide gold mining boom in countries thought to be rich in gold deposits. One is the Philippines.

Mining for gold in the Philippines was nothing new. The Spanish and local tribes had for many decades operated small gold mines in the mountainous Benguet area in Northern Luzon and Paracale gold sands in Camarines Norte. But no one had discovered large deposits.

Then in 1907 a newly organized American Company, Benguet Mining, saw promise. The firm set up a modern mine whereby gold one was leached by cyanide to filter out the gold. The initial plant was destroyed in a typhoon but rebuilt under the leadership of American Judge John Hausermann. By 1927 Benguet was producing 10,000 ounces of gold per month.

Lured by the US Treasury’s offer of $35/ounce prospectors and mining engineers flooded into the Philippines. Dozens of gold mining companies blossomed overnight. The Securities and Exchange Commission was caught completely unprepared to process the onslaught of registrations. Mining laws were not in place to verify authenticity of claims or areas to be mined. This provided a scenario ripe for abuse. The Benguet/Baguio/Paracale frenzy quickly spread to other areas throughout the country and to other minerals.

Started in 1934 the Gold Boom reached its peak in 1937. A 1935 Manila Bulletin headline read: “Mining Stocks Shoot Upwards”. A mind set of wild speculation took hold. AmCham”s popular Business Journal Editor Walter Robb noted: “Everyone wanted in-the butcher, the baker and the candle stick maker. All had their finger in the gold pie.” 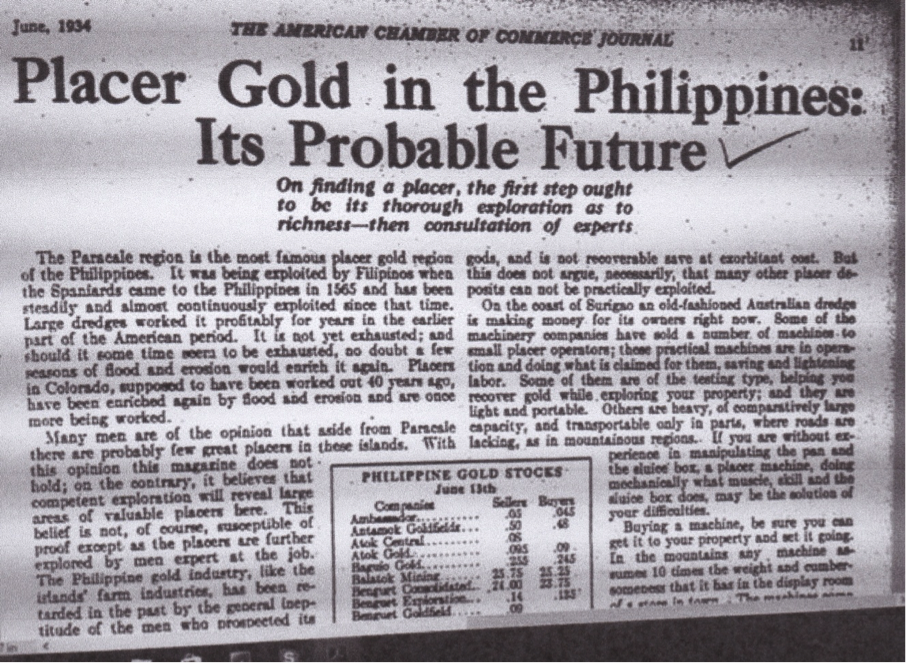 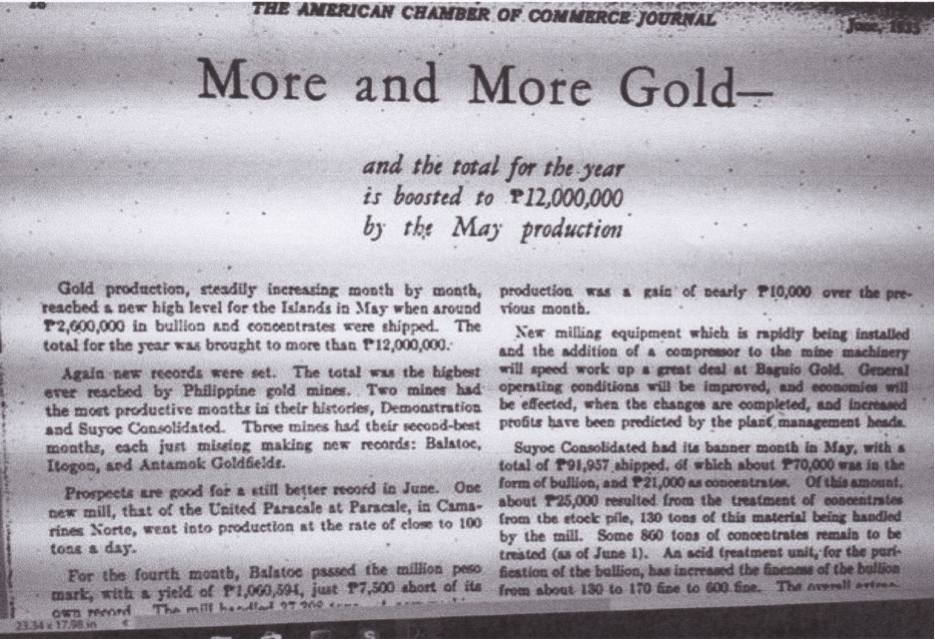 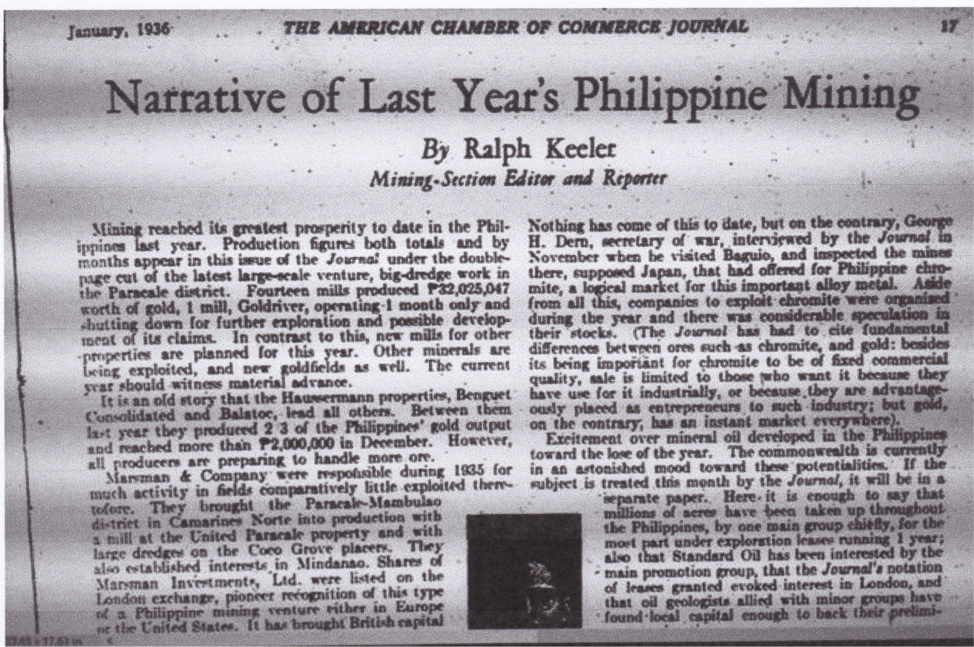 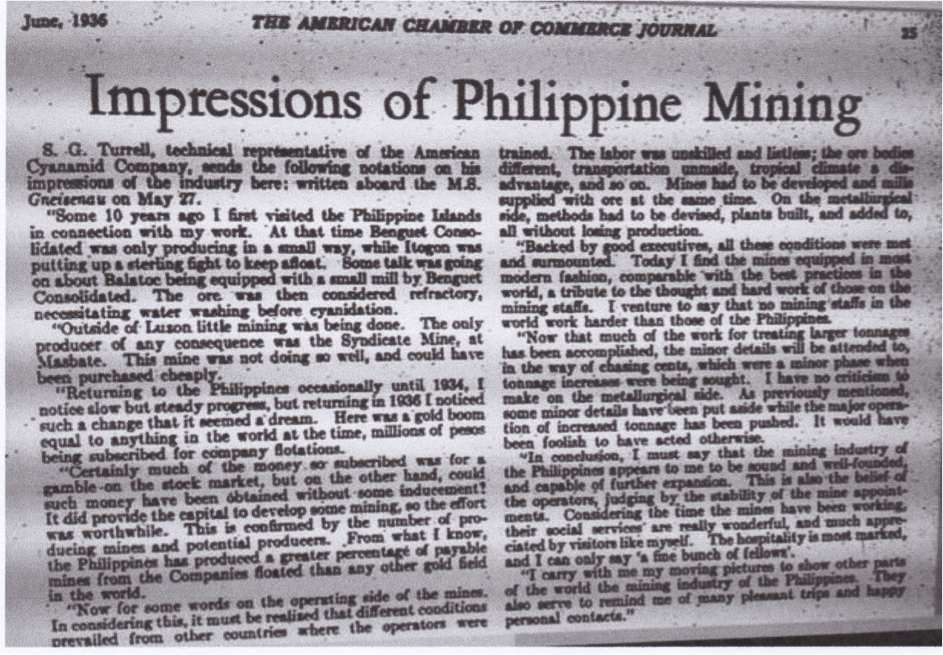 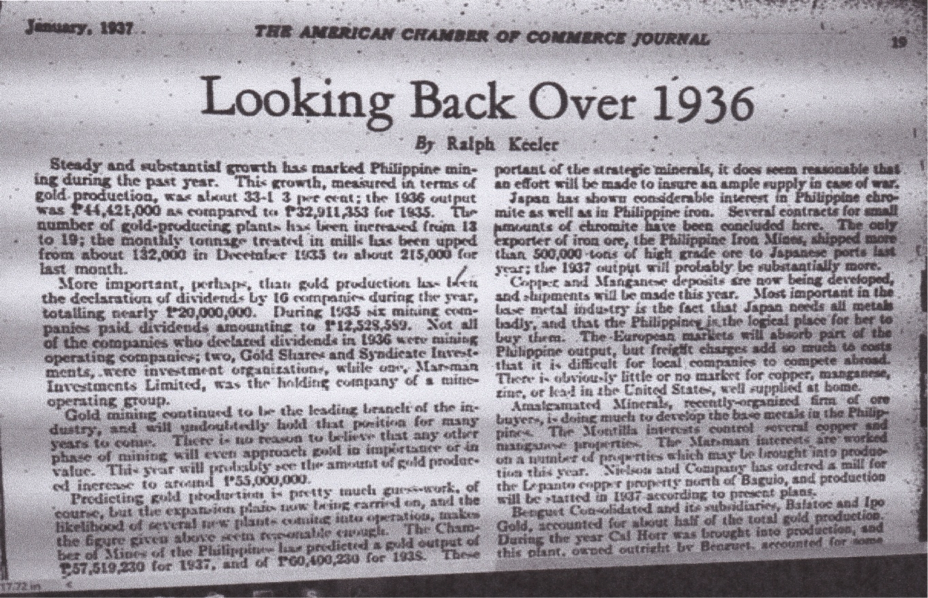 In 1935 and 1936 gold mining shares price’s enjoyed a spectacular rise. Then in the middle of 1937 shares prices began a steep dive. A September 1937 AmCham Journal Article Headline:

“Nature had been less profuse in ballasting Philippine mountains with gold than had been anticipated by hosts of organizers, shareholders and speculators…. It is now plain to see that the lack of fundamental geological data took the public at lamentable damage–The truth has come out that nature has been comparatively niggardly concerning gold— when the boom spread Rainbow areas all over the Philippines this homely fact was quite unrealized. If anyone spoke of the possibility of it he was not believed and his prudent counsel made him a pariah. He was pelted from the market place with invectives”.

Investors wildly attempted to sell. There were few buyers. 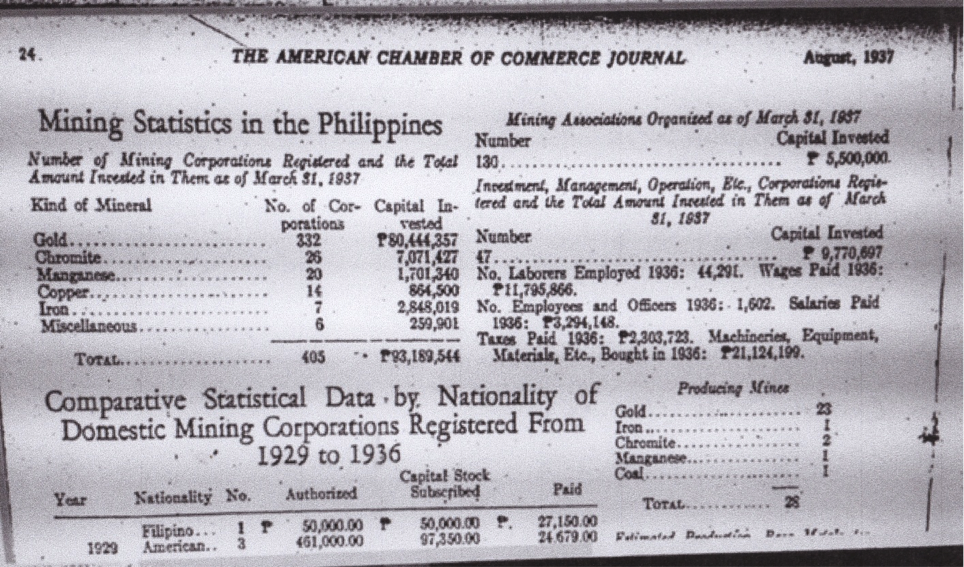 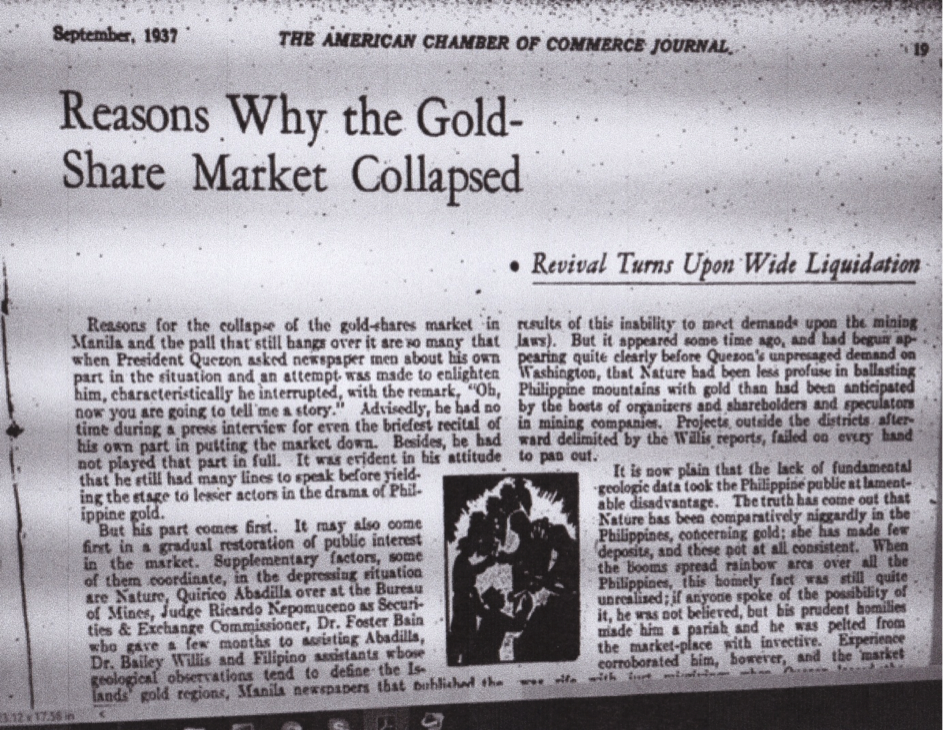 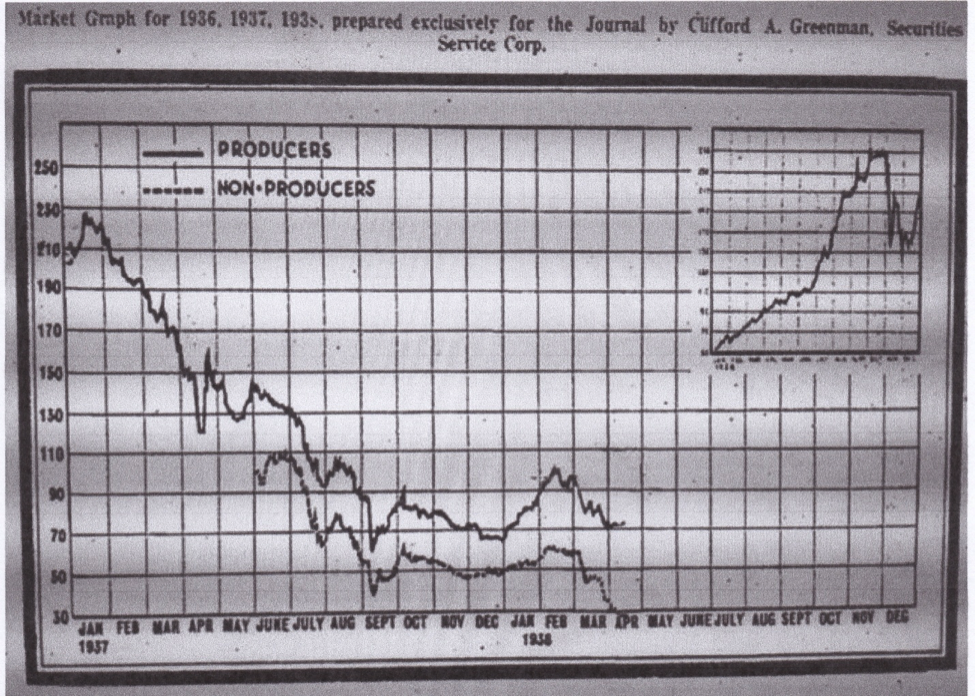 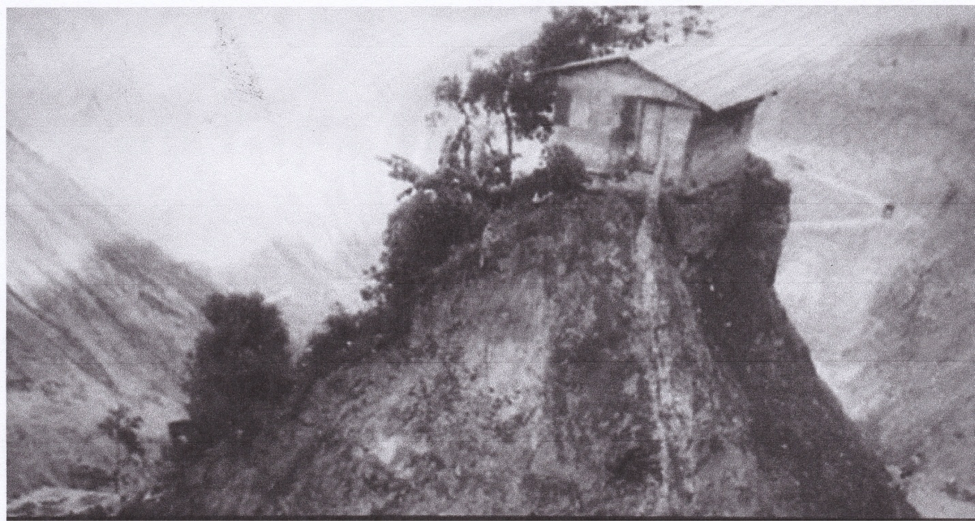 “A Mine in the Mountain Province”

A Catalogue of Problems

In 1938 and up to the outbreak of WW2 many hoped for and thought possible a mining revival. A few established mines, Benguet (Gold) and Lepanto (Copper) carried on with satisfactory results. But generally enthusiasm for mining was dead. In the late 1960’s and early 1970’s a Copper and Nickel Mining Boom, much smaller, took place. It too petered out as world prices collapsed. BB