Spanish presence on the large island of Mindanao began in 1569 with Catholic Missionaries and Traders. At their request for protection from Moro Pirates a stone fortification (Fort Pilar) was built in 1635. In the late 1800’s Filipino Revolutionaries were increasingly at odds with the Spanish Colonial Government. Armed conflict broke out. In May 1899 Revolutionary General Vicente Alvarez defeated the forces of Spanish General Diego de Los Rios. They took possession of Fort Pilar. Victory was short lived however as only a few month later U.S. Army Volunteers Brig. General John Bates sailed into port with two battalions of soldiers. They quickly took possession of Fort Pilar. Bates also concluded a peace treaty with the politically powerful Moro Sultans of Sulu and Mindanao whereby U.S. sovereignty was recognized. 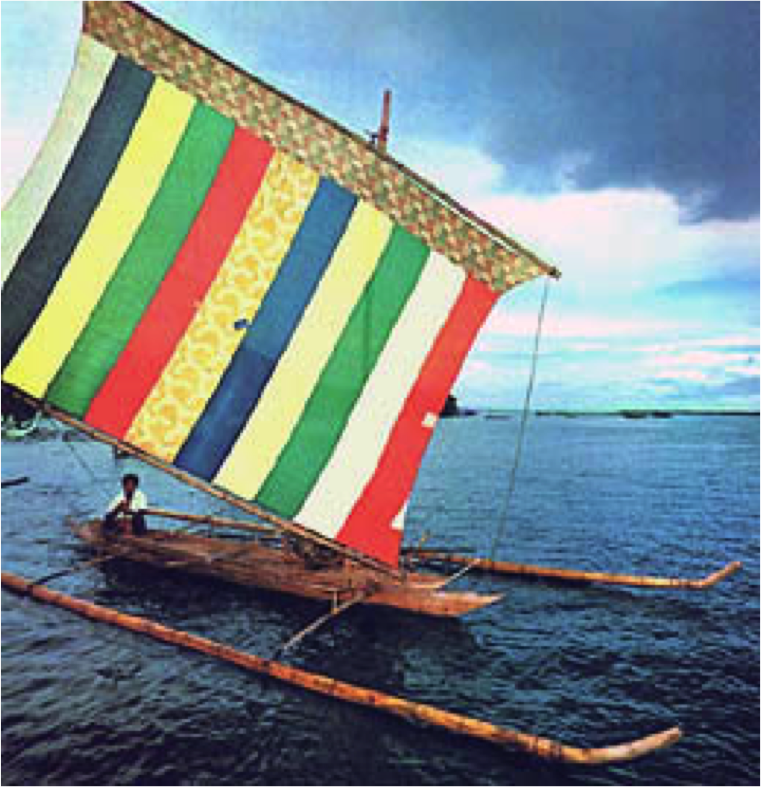 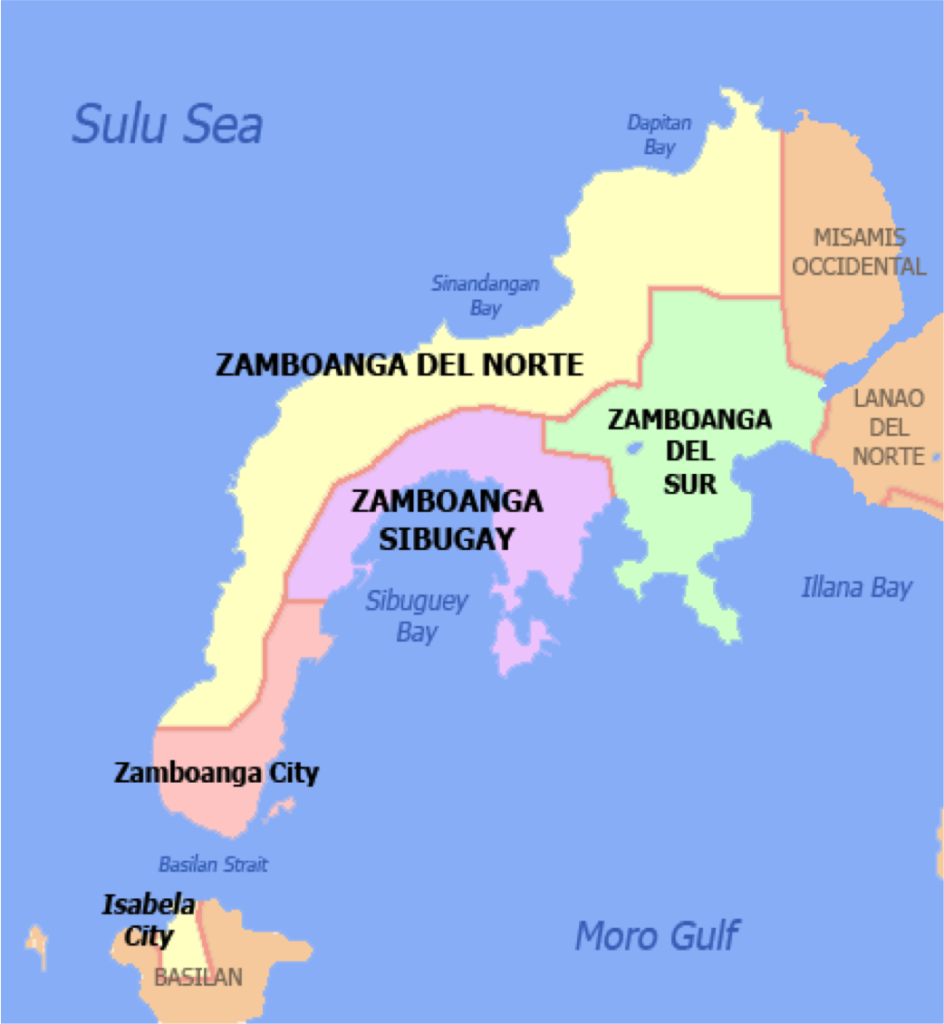 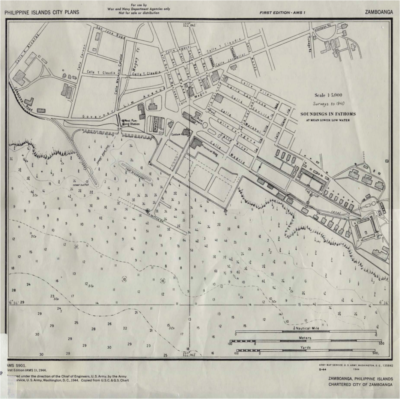 Zamboanga Town Map 1940 – Fort Pilar is on the far right

Following Spain’s defeat in August 1898 there was much debate in Washington D.C. as to “what to do with the Philippines”. The large southern island of Mindanao was largely ignored; being Muslim and of scant strategic value. At the end of debate President McKinley ruled in favor of the U.S. keeping the entire Philippines archipelago as a possession; an American base in Asia and to forestall potential land grabs by Japan and Germany. Both countries were late arriving colonial powers.

American Colonial Government was centered in the town of Zamboanga. A series of U.S. Army officers ruled with a two fold mission. 1.) Develop U.S. commercial and agricultural interests and 2.) Protect against roaming seaborne Moro Pirates.

U.S. presence was anchored by a modest Army Force of two battalion stationed at Fort Pilar and housed at adjacent Pettit Barracks. Enlisted ranks of about 250 men were Philippine Scouts commanded by regular U.S. Army Officers and Noncoms. “Moros” were included in the enlisted ranks and wore distinctive head gear for identification. Duty assignments at Fort Pilar were considered one of the best posts in the Army hallmarked by gracious living and a great deal of free time for recreation. 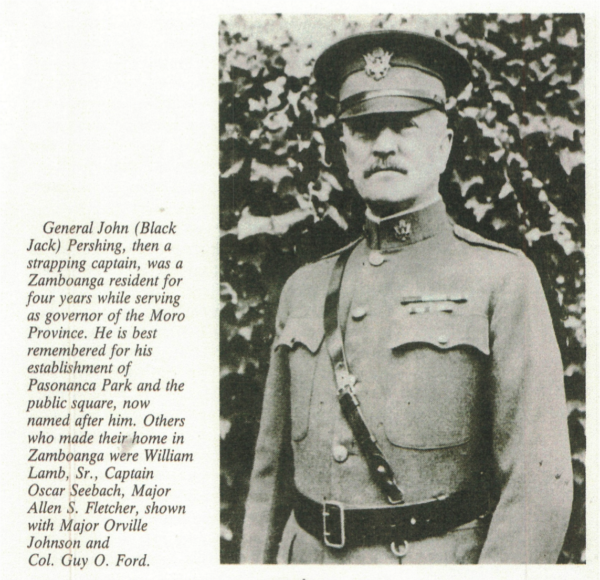 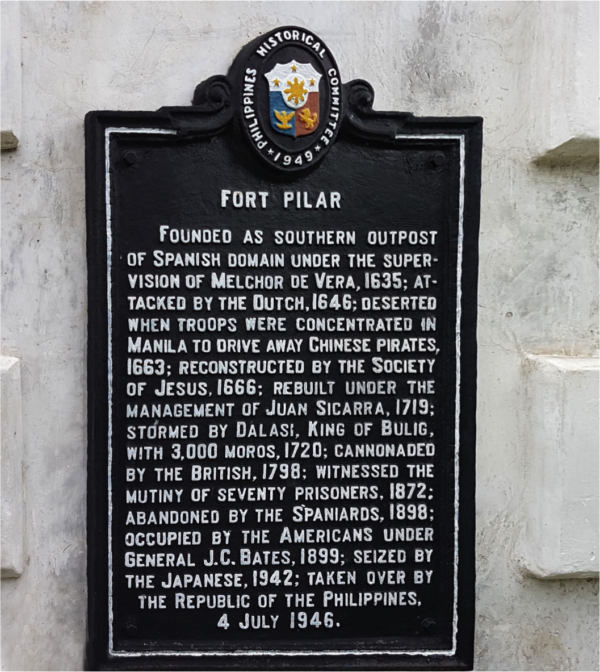 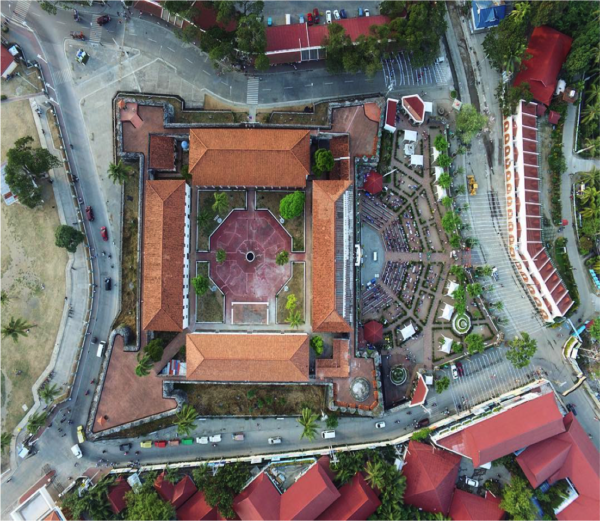 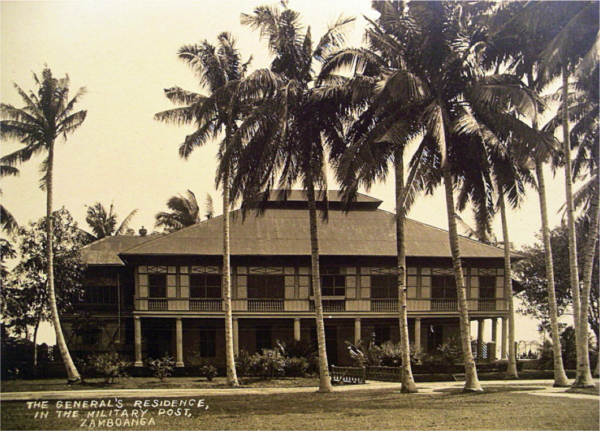 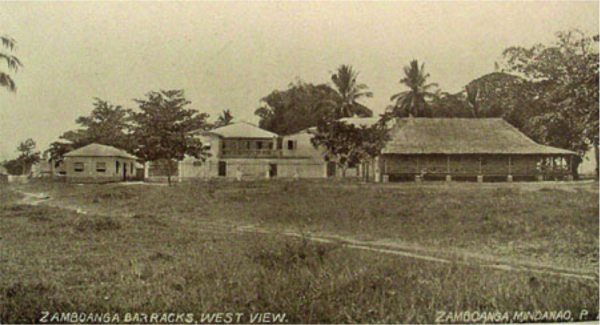 Pettit Barracks – Home of the US Army 43rd Infantry Regiment 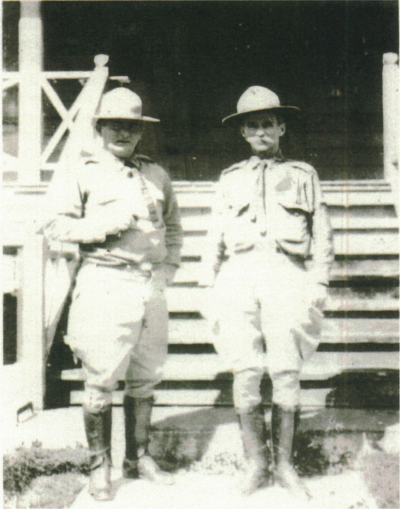 With security basically assured by the Army and a succession of military Governor Generals Zamboanga grew into a thriving commercial center at the tip of Mindanao Island. The town was built along the waterfront and in typical Spanish tradition, featured a town square. Governor General John “Black Jack” Pershing, then a Captain, was noteworthy (1909 – 1913). Pershing accomplished much in building roads, port facilities and the Pasonica Park. 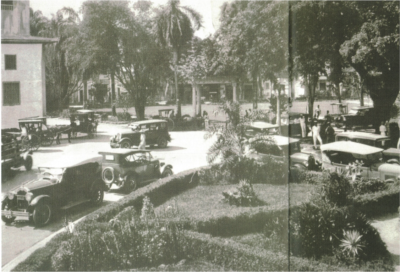 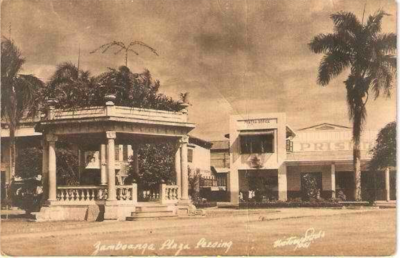 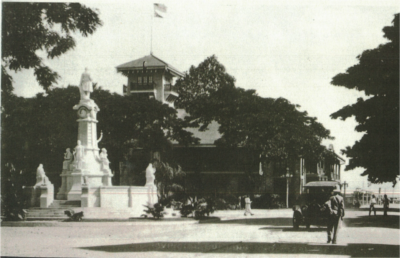 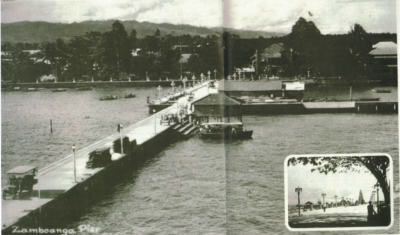 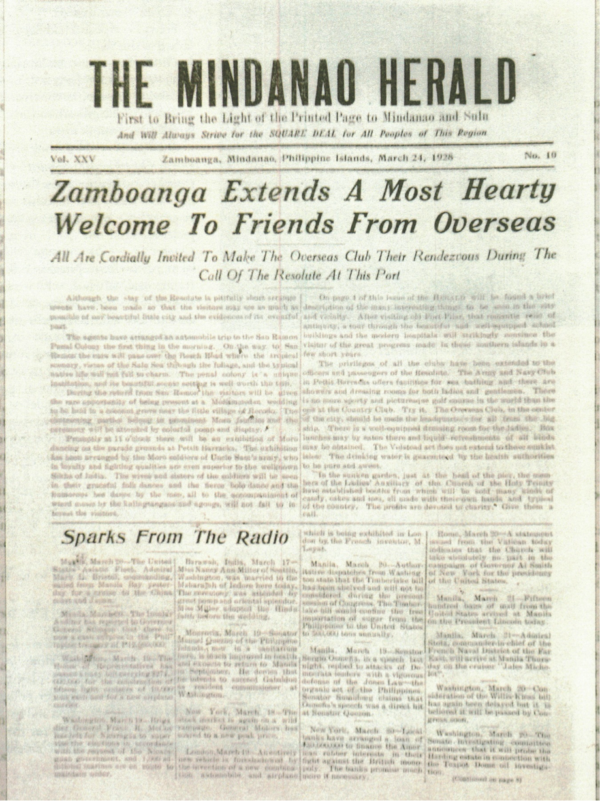 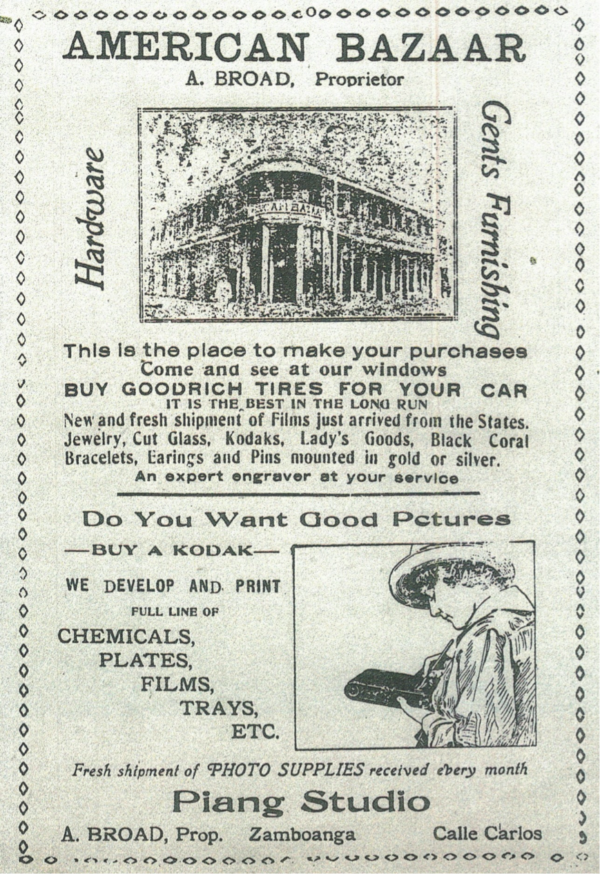 Advertisement for the American Bazaar 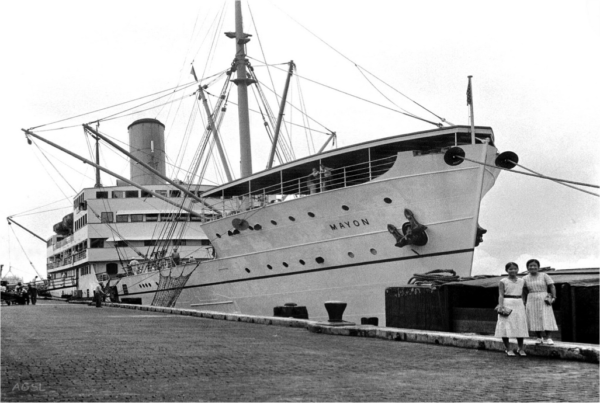 Zamboanga Hermosa gained the reputation as possibly the prettiest town in the Philippines; neat and clean. A river ran through it. A first-class pier jutted out into the bay. Ample electric power came from a hydroelectric plant near Pasonica Park. Visitors could choose from four hotels (Bayot Oriente, Elite and Hananda (Japanese)). Pardoes Garage offered Opel Bantam cars for rent. American Alan Hackett published a weekly newspaper (The Mindanao Herald). Alongside the Town Plaza were two movie theaters, the American Pharmacy and bazaars selling local and imported goods. Chartered bank of India (British) provided banking services. The U.S. Army operated a golf course for recreation.

Education – Universal public education was a key goal of American Colonial Government. Zamboanga was no exemption. However, unlike the rest of the Philippines, English was not used. The medium of instruction was Chabacano, the widely used local dialect. A Moro agricultural school taught practical agricultural and trade skills. Indeed the 1920’s and 1930’s were wildly acclaimed as the “Golden Years” of Zamboanga. 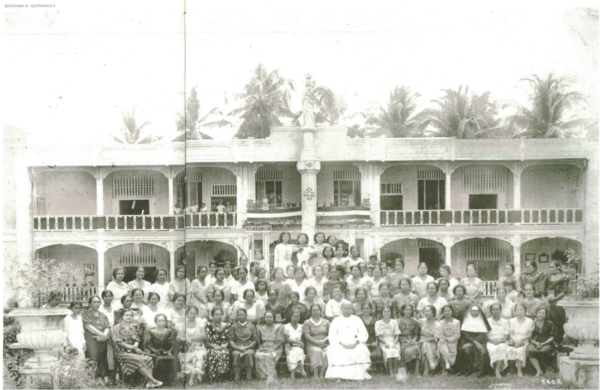 On March 2, 1942 the Imperial Japanese Army, supported by a small naval force attacked. Following a series of encounters American and Philippine Forces surrendered on May 15, 1942 as instructed by Lieutenant General Wainwright. Most Combatants became POW’s. But many others fled to join resistance units in the mountainous inner regions of Mindanao. Zamboanga was liberated from Japanese rule by returning U.S. Forces in March 1945. –BB